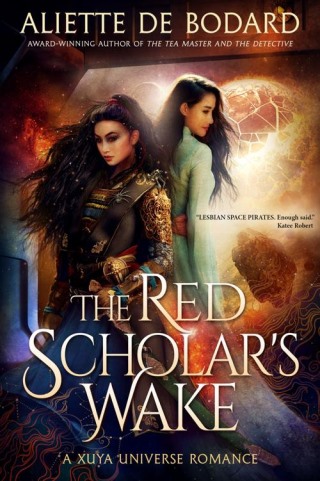 From the author of the Xuya universe comes a rich space opera and an intensely soft romance...

When tech scavenger Xích Si is captured and imprisoned by the infamous pirates of the Red Banner, she expects to be tortured or killed. Instead, their leader, Rice Fish, makes Xích Si an utterly incredible proposition: an offer of marriage.

Both have their reasons for this arrangement: Xích Si needs protection; Rice Fish, a sentient spaceship, needs a technical expert to investigate the death of her first wife, the Red Scholar. That’s all there is to it.

But as the interstellar war against piracy rages on and their own investigation reaches a dire conclusion, the two of them discover that their arrangement has evolved into something much less business-focused and more personal...and tender. And maybe the best thing that’s ever happened to either of them—but only if they can find a way to survive together.

Advance Praise for The Red Scholar's Wake:
“So romantic I may simply perish.” —Tasha Suri, author of The Jasmine Throne

“The Red Scholar’s Wake is a fizzingly inventive space opera, quite unlike anything I’ve encountered before, and told with style, grace, and a big dose of heart. SF is lucky to have Aliette de Bodard.” —Alastair Reynolds, Sunday Times bestselling author

Aliette de Bodard: Aliette de Bodard lives and works in Paris, where she has a day job as a System Architect. She studied Computer Science and Applied Mathematics, but moonlights as a writer of speculative fiction. Aliette has won three Nebula Awards, a Locus Award, a British Fantasy Award and four British Science Fiction Association Awards, and was a double Hugo finalist (Best Series and Best Novella).

Most recently she published Fireheart Tiger (Tor.com, Nebula Award finalist, British Science Fiction Association finalist), a sapphic romantic fantasy inspired by pre colonial Vietnam, where a diplomat princess must decide the fate of her country, and her own.

Her short story collection Of Wars, and Memories, and Starlight is out from Subterranean Press.

She is also the author of The Tea Master and the Detective (2018 Nebula Award winner, 2018 British Fantasy Award winner, 2019 Hugo Award finalist), a murder mystery set on a space station in a Vietnamese Galactic empire, inspired by the characters of Sherlock Holmes and Dr. Watson; and In the Vanishers’ Palace, a dark Beauty and the Beast retelling, where they are both women and the Beast is a dragon.

Visit her website www.aliettedebodard.com for free fiction (including further short stories set in the same universe as this one), Vietnamese and French recipes and more.